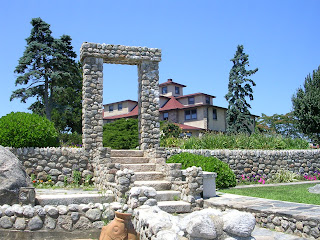 I just got home from my MFA program's summer residency on Enders Island in Mystic, Connecticut. My days were spent learning about the craft of writing in morning workshops, attending seminars on everything from the poems of Zbigniew Herbert to what to do after I receive my degree (the short answer: keep writing) and sitting in the chapel after dinner, listening to my professors read from their work. And, yeah, there was some downtime. Bonfires and s'mores, swimming and wiffle ball, fellowship under the stars and a talent show.  You know what they say about all work and no play...


Some notes from my Isle of Write:

The right roommate makes all the difference. Kate, thanks for bringing the fan, the fun and the fierceness. You are my Jiminy Cricket.

Don't be afraid to ask for you want or need. Whether it's a meal, a mentor or a chance to do something new, don't hesitate. Or, as Kate said to me: "just f'ing take it!"


No matter how much bug spray you use, mosquitoes will get you.

No sign of Chuck Johnson this time around. He's probably going to the Galway residency.

Gregor from Kafka's Metamorphosis, Holly Golightly's party in Breakfast at Tiffany's, Leon from The Professional. What? Who would you pick?

Sit in the tent for "fellowship" long enough and you'll find out which literary character is the most desirable mate. Mine? Atticus Finch, To Kill a Mockingbird.

You can learn a lot about a person by asking about literary crushes.

Honor the traditions of those who came before you. Kate and I co-wrote a parody song in honor of the graduating cohort and performed it with A.J. and Erin at the talent show. Writing Queen (yes, as in Dancing Queen by ABBA) was whistled or hummed for the rest of the residency. That is, when people weren't whistling or humming Phil's and Linsey's awesome Mason's Road, the Fairfield University MFA program's version of John Denver's Country Road. Pat O'Connor, we tip our hats to you.

The only way to get more comfortable with public speaking is to do it every chance you get. Not only did I read some of my work in front of my classmates, I had the honor of introducing three of my fellow students at a reading. Brian, Sam B. and Erin, I meant every word I said.

It's back to the day job in the morning, but as I drift off tonight, I'll be thinking of my classmates and the words Phil borrowed from John Denver to make the song his own, our own.