What a Glorious Feeling!

Can't sleep. I had a late dinner (mistake), washed it down with a Coke (bigger mistake) and then watched Singin in the Rain in its entirety (and the opening number of On the Town). So, I guess that is my equivalent of being hopped up on goofball.

I don't even know how many times I've seen this movie, but it still gets me. The singing, the dancing, an 18-year-old Debbie Reynolds holding her own with Kelly and O'Connor, a young, nearly unrecognizable Rita Moreno as Zelda (she has Cuban red hair in this one), Cyd Charise of the endless legs and scowling puss, the snappy patter between supporting players:

Lina Lamont: Gee, this wig weighs a ton! What dope'd wear a thing like this?
Rosco: Everybody used to wear them, Lina.
Lina Lamont: Well, then everybody was a dope. 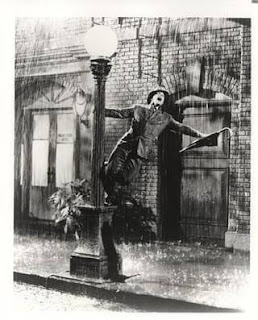 Yes, I love it all. But mostly, like everyone else, I love the moment. You know, the moment when it's raining and Gene's singing. Like Leonard Bernstein said, "that's an affirmation of life." Tonight at the end of the number, when he's strolling away, all swagger and style, I got a little choked up. Maybe because it reminded me of how sweet life can be, or maybe because it took away the sting of a somewhat crappy day. Whatever it was, it came along at just the right time. I guess I'm just a sucker for a man in a rapidly shrinking grey wool suit singing his heart out because he's so in love. Who isn't?

Click here to enjoy the moment and try not to smile. You feel awesome now, right? I knew it. Gene Kelly totally had powers and he used them for good. Lucky us.
Posted by @DaisyCAbreu at 12:54 AM 1 comment:

Email ThisBlogThis!Share to TwitterShare to FacebookShare to Pinterest
Labels: Movies

I wrote this one while I was waiting for my Chaucer class to start way back in 1993. It was a cold day and then suddenly I had that feeling like spring was on its way. I had that feeling the other day while sitting in my office, so I dug this one up to share.

I caught a scent of
spring
sneaking up into my nose today
and filling my head with the
promises
that are two months away.

I imagined a breeze wrapping itself around
my bare calves
as the wool of my socks scraped against them.

An imaginary sunbeam
caressed
my face,
breaking up the clouds that had gathered
in front of my eyes for so long.

but then my slice of spring vanished.
I was cold
again.
hidden under the layers of these winter days again.
Trying to get back
but realizing I'll just have to
wait.

Email ThisBlogThis!Share to TwitterShare to FacebookShare to Pinterest
Labels: Writing

What's in a Name?

Note: this originally started as an email to my coworkers about my constant use of nicknames for people. Little did I know I was writing writing, not just sending an email.

The Cuban experience is very similar to being in some sort of witness protection program. NO ONE goes by their real name in Cuban Community, because their real names are too damn long. Take my family for example:

Domingo Guzman Abreu-Fuste: Mingo, Mingollo, Viejo (old man, what my mother called him), Papi (to his children and grandchildren)

Deisy Cristina Dominguez Abreu: China (pronounced Cheena because of her Asian eyes), Mami, Tita (to her grandchildren), Vieja (that's my father called her)

Pedro Julio Abreu: Pete, Chini (pronunced Cheeny,he's his mother's son for sure), Tio (to his nieces and nephews).

Also not included are the number of endearments my parents have/had for my sister and me. They include: Mi Nina (my girl), Melindy (my pretty), Tatico(?), Chuchi (??), Mimi and the dreaded Gordy (as in Gorda, as in fat). My maternal grandmother was known as Mami Pupa. My sister's children call my mother's brother Uncle Tio (Uncle Uncle), which I think is much better than Great Uncle Lucas, don't you?

As for those in my extended family (read, people that I was not related too, but I saw more than my blood relations), if they have real names, I never knew them. A lot of them just went by their last names (Perez, Gonzalez, Lopez), because that's not confusing. Not like there were other people in town with the same last name right? I grew up around people who went by the following: Guapachichi, El Mapo, Lingita, Macuco, Regalao (means gifted), El Nino (like the weather system), Congo, El Mono (the monkey), Panchito, Pachi, Cuca, Nene, Tete, Lassi ...I could go on here people.

As you might have guessed, this phenomenon carried over into my generation. I attended high school with people who went by Santi, Pupi, Humby, Mandy, Hangi and Cuba...that's just the boys.

If you didn't know someone's name or were talking about a stranger, then Fulano or Mengano was sufficient. Females were known as Fulana or Mengana, children were Fulanito or Menganita.

I hope this has been an enlightening class. Next up: Voodoo, White Magic & Catholicism: a Match Made in my Mother's Medicine Cabinet.
Posted by @DaisyCAbreu at 7:39 PM 1 comment: